Archived — Modernizing the IP Community—Page 4 of 15

2. Modernizing the register of patent agents and the list of trademark agents

CIPO is required by legislation to keep both a register of patent agentsFootnote 1 and a list of trademark agentsFootnote 2 (the lists). During roundtable discussions held by CIPO, these lists were specifically identified by customers as in need of improvement. Since they serve as front line tools to customers, CIPO has undertaken to review the usefulness of this service in order to support those in search of a qualified IP agent.

The starting point for this review stems from CIPO customers asking for an easily accessible, authoritative list of qualified agents and their area of technical specialty. Footnote 3 An initial review of the register of patent agents and list of trademark agents has revealed that the lists are antiquated, challenging to use, incomplete, and not up-to-date. Presently, the lists are accessible through the CIPO website or by contacting the CIPO Client Service Centre. The lists themselves appear to be difficult to find for those not already knowledgeable in the field of IP or familiar with CIPO's website.

When a Canadian resident patent agent registers or renews with the Patent Office, they are asked if they would like their name published on the publicly available register of patent agents. The CIPO website indicates that this is a "limited list of registered patent agents who are open to accepting new clients". Footnote 4 Those that do not wish to have their names published are kept on a complete list that is held only by CIPO.

Non-resident patent agents may add their names to the register as long as they pay an entry fee and are in good standing with the patent office in the country of their residence. Footnote 5 These names, however, are not published on the publicly available register.

The Trademarks Office only keeps a single list of trademark agents. This list is publicly available and consists of qualified resident agents, non-resident agents, and firms.

2.2.3 Shortcomings of the lists

The CIPO website does not identify the purpose of the lists. There is no indication of the qualifications required to be entered on the lists. There is a discrepancy between the two lists in that one is a limited list of published names while the other is a comprehensive list. Finally, it is not clear from the website how up-to-date the content of the lists is.

The current list of trademark agents includes non-resident agents, but does not indicate the inherent constraints placed on these foreign agents. Non-resident agents must appoint an associate agent who resides in Canada in order to correspond with CIPO in respect of an application. Footnote 6 This lack of information can be misleading to applicants.

Another glaring drawback to the lists is the complete lack of effective searchability. There is no keyword searching function available for either list. From the perspective of the customer, the lists are not easily found and do not present themselves as user-friendly.

2.2.4 Agent lists in other jurisdictions

Other jurisdictions were reviewed to determine whether and how IP agents, lawyers, attorneys and firms appear on the official register, list and/or database of persons or firms recognized to act before their respective authorities. Specifically, the foreign jurisdictions reviewed were: Australia, the European Union, the United Kingdom, New Zealand, Japan and the United States.

In general, where an authority does not keep an official list, a professional oversight body independent of the authority will hold and maintain a list. Regardless of who holds the list, its existence may not be obvious to those with little experience in the field of IP. Agent lists in foreign jurisdictions range from unsearchable to fully searchable online. Where searchable, information is generally limited to name and contact information.

Other findings of interest:

The only common point between all lists appears to be that, whether mandatory or voluntary, if a person or firm has requested presence on a list, they must be qualified to practice before the authority holding the list. The requirements that underpin such recognition may or may not be readily accessible.

In summary, not every authority requires a list of individuals or firms authorized to practice before that authority. Where lists exist, it is unclear whether all authorities require that such lists reflect every person or firm qualified to act before them. Online search functions, where available, can be a challenge to locate and may reflect only basic contact information about an individual or firm.

2.3 What should be on the lists and how should it get there?

One of the main purposes of the lists is to provide customers with a tool to identify qualified patent or trademark agents. The working group is of the opinion that there would be value in providing information in addition to what is currently available from the lists (see Appendix C for a sample of current listings).

2.3.1 Information to be included on the lists

The following should be included for all entries on the lists:

An end-user of the list should be able to search the information by a single or a combination of criteria, including agent name, geographic location, year of qualification and firm name (see Appendix D for a mock-up).

As discussed in section 2.2.3, there should be a disclaimer published alongside any non-resident agent or firm appearing on the lists. It is suggested that the disclaimer clearly state that the foreign agent or firm must appoint a Canadian resident agent in order to correspond with CIPO regarding all matters related to an application.

A primary concern with the lists is the assurance that the available information is up-to-date. As an authoritative listing, it is imperative that the details be accurate. As such, this working group believes that agents should have online access that allows them to be responsible for keeping their own contact information up-to-date.

2.3.3 Validating information on the lists

In an improved agent list, the information found on the list could come from the following main sources:

From a process perspective, there would be three elements after receiving the source information:

The figure below describes the sequence for these three elements in the process of maintaining and overseeing the agent lists. 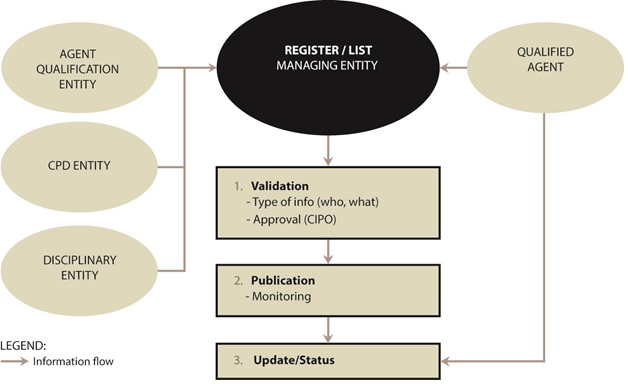 The source of the information that will be on the list once an agent has qualified is gathered from the various parties. The confirmation of the qualification is communicated by the entity administrating the qualification process to the one administering the list. At this stage, the qualified individual is asked to provide their contact details.

The first step, validation, is the review of the information to be part of the list and its approval by the Commissioner of Patents, Registrar of Trademarks and CEO of CIPO.

The second step is the publication of the information on the list.

The third step, update/status, serves to update the information on the list as agents meet their CPD requirements, are subject to disciplinary measures, or make changes to their contact information.

The remaining items are suggested for further investigation and may be dependent on the implementation of other recommendations in this report.

The above findings have led the working group to conclude the following:

It is the recommendation of this working group that:

Section 15 of the Patent Act

Section 21 of the Trademarks Regulations

Section 15 of the Patent Rules

Subsection 9(1) of the Trademarks Regulations