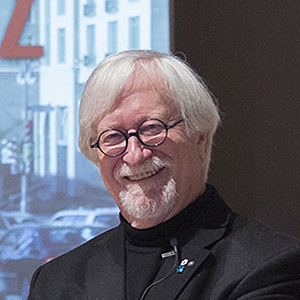 Are you familiar with the BIXI bike, the self-service bike that is available whenever you want, on four continents? The creator behind this innovation is none other than the famous industrial designer Michel Dallaire.

A multi-talented designer, Michel has been around since 1965. He has been involved in the design of a wide variety of projects and consumables, from the one-gallon bleach bottle to the angel-shaped Angelcare baby monitor and the Olympic torch! Always at work, he is currently a senior advisor on a number of special projects related to urban development and street furniture.

With over 50 years of industrial design under his belt and many more years to come, he is not finished finding solutions to problems. "Industrial design is about solving problems and creating a product that people want," he says. For his BIXI prototype, he was inspired by the boomerang "because a boomerang comes back, and we wanted the bikes to come back." When you compare the two, the similarity of the curve is striking!

BIXI is owned by PBSC Urban Solutions, which has registered over a dozen industrial designs in Canada. "A project's only value is its protection. If the project is not protected, it has no commercial value," says Dallaire. "Imagine, if we had not protected our intellectual property for BIXI, everyone would have copied us." With 60,000 bicycles and 5,000 stations in 30 cities around the world, it is fair to say that business is going well.

The Quebec industrial designer also had the chance to create the Olympic torch design for the 1976 Summer Olympic Games in Montréal. The geometric form was inspired by cattails, which are sometimes used as improvised torches. Dallaire's torch burned olive oil, "because we wanted a photogenic flame, visible both day and night," he says.

I aim for timelessness in its technical and aesthetic purpose and am wary of passing trends that eventually go out of fashion. I want to highlight the object, but not distort it. Isn't that precisely our role in giving things shape?

The Quebec designer has received many awards and recognitions during his long career, including the Order of Canada, the Ordre national du Québec and the Prix Paul-Émile-Borduas.