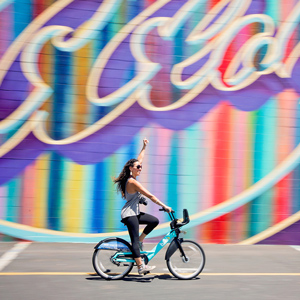 "Changing the world, one city at a time," is the motto of PBSC Urban Solutions Inc. (PBSC), and it is easy to understand why. Creator of Montréal's bike sharing system (BIXI), this Canadian company designs, produces and sells bike sharing systems all over the world. The eco-friendly system consists of a docking station and kiosk where bikes can be rented by credit card and returned. Customers can also use their membership card or a mobile app. Popular in Montréal and Toronto, PBSC has successfully implemented its products in more than 30 cities around the world, including New York, London, Chicago, Honolulu, Melbourne and Rio de Janeiro.

The system was created in 2008 at the request of the City of Montréal, whose mayor at the time had seen the bike sharing system in Paris and wanted Montréal to have such a system as an eco-friendly way to address traffic congestion. To that end, a team was created that included the renowned industrial designer Michel Dallaire and various strategic partners. In the beginning and later on, significant investments were made in research and development to ensure that the company would remain recognized as a pioneer and would continue to introduce new products that would appeal to its customers around the world. It goes without saying that the teams are the driving force behind this ambition, but intellectual property (IP) is the source.

"IP is at the heart of our success," says Adrian Popovici, PBSC's Chief of Legal Affairs. "In addition to trademarks, we hold approximately 140 patents and industrial designs registered or in the process of being registered the world over. Our IP portfolio includes registrations in some 40 countries. It was a long and sometimes arduous process. But because Canada has now acceded to the Hague Agreement Concerning the International Registration of Industrial Designs, companies like ours will only need to file an application for registration once through the World Intellectual Property Organization and be able to protect it in more than 60 countries."

"PBSC's IP strategy shows customers, many of which are major cities or partners, that PBSC is a serious company that is legally well structured to protect its products and ensure continuity over time. Cities generally hate taking risks, and the fact that we hold patents and industrial designs on our products reassures them that we do in fact own the rights to our IP."

PBSC wants to continue its global growth by implementing its system in as many cities as possible around the world. Says Mr. Popovici, "We are, in our own way, helping to reduce traffic and pollution in cities and to encourage people to adopt a more active lifestyle. This is really an incredible opportunity for us to make progress and leave our mark."