The PMSR for each term supersedes all previous terms’ PMSRs made by the Bureau (for example, Term 2 will supersede Term 1). The figures contained within this report are subject to adjustments in future publications.

This section highlights the Bureau’s newsworthy and public-facing activities for the term, trends in results, and explanations behind significant variances in the data, as required. 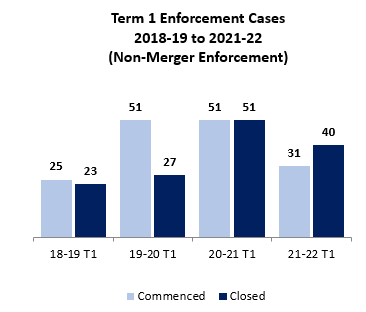 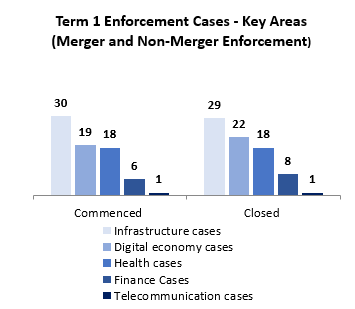 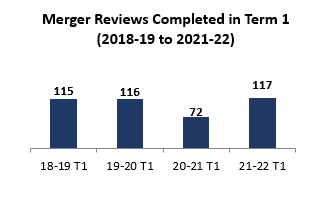 100%
Percentage of Non-Complex Mergers reviewed within the service standard

92%
Percentage of Complex Mergers reviewed within the service standard 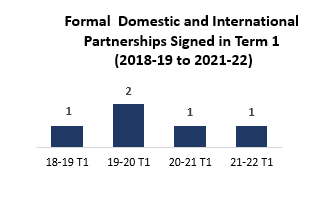 In June 2021, the Bureau hosted a Competition and Growth Summit. Over three days, panelists discussed topics such as how competition can foster inclusive growth, government strategies to apply a competition lens in achieving policy goals, and lessons learned by competition authorities through the pandemic. Hundreds of participants from more than 45 countries joined the virtual conference.

The Bureau played an active role in the work of the Organisation for Economic Co-operation and Development (OECD) Competition Committee. In 2021, the Bureau provided four written submissions to the OECD.

Highlights for the Term – Term 2

This section highlights the Bureau’s newsworthy and public-facing activities for the term, trends in results, and explanations behind significant variances in the data, as required. 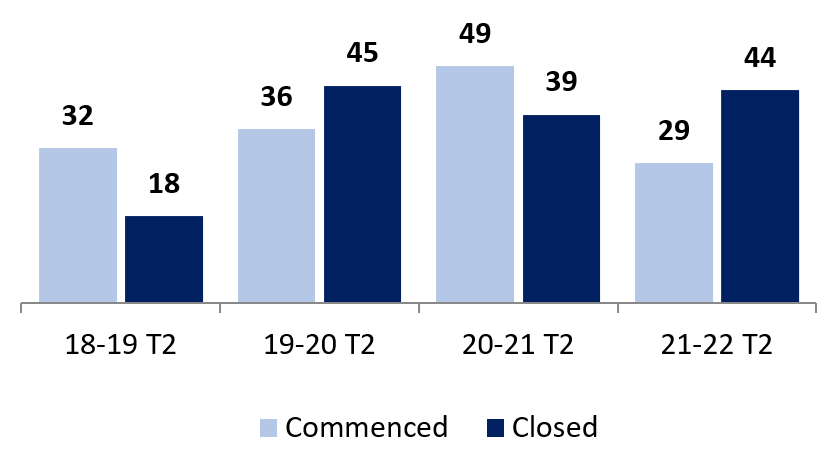 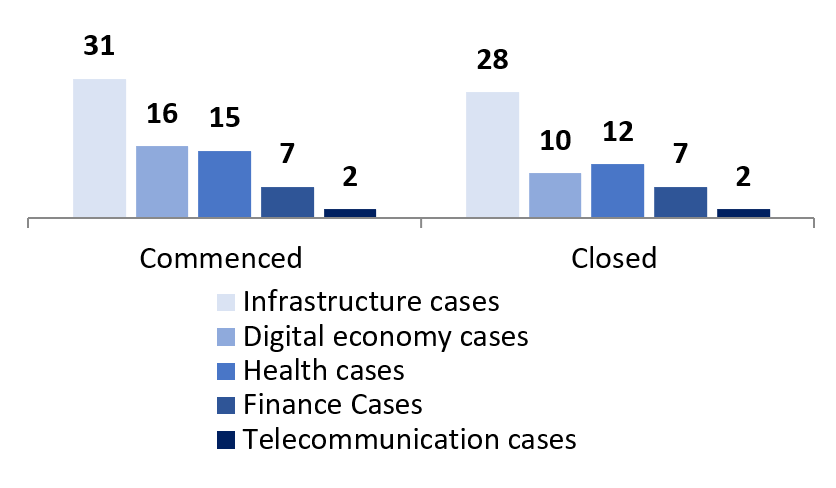 100%
Percentage of Non-Complex Mergers reviewed within the service standard

97%
Percentage of Complex Mergers reviewed within the service standard

As a member of the International Consumer Protection and Enforcement Network (ICPEN), the Bureau continued its work to advance consumer protection issues relating to misleading environmental claims and COVID-19.

The Bureau played an active role in the work of the Organisation for Economic Co-operation and Development (OECD) Competition Committee. In December 2021, the Bureau provided a written submission on economic analysis and evidence in abuse cases.

Following an investigation and a recommendation by the Competition Bureau, criminal matters are referred to the Public Prosecution Service of Canada for determination on the laying of charges. Competition Bureau action is contingent on the Public Prosecution Service of Canada's decision (e.g., initiating a prosecution; concurring with leniency recommendation which leads to a plea agreement and, eventually a guilty plea).

2.2 – Contested investigation - Before the Courts or Competition Tribunal

The Bureau promotes transparency in all its operations by engaging with stakeholders via traditional and new media channels, providing them with up to date information and guidance.

Alternative Case Resolution:
An alternative case resolution is an intervention that resolves concerns of non-compliance without the need for litigation before the Competition Tribunal or the Courts. Through a range of instruments (for example, information letters, targeted inspections), the Competition Bureau may facilitate voluntary compliance by identifying the issue to the business or individual at an early stage.
CA Identification Number:
The CA Identification Number is an identification number registered for the exclusive use of a Canadian dealer on the label of a consumer textile article in place of a name and postal address (as per the Textile Labelling Act).
Competition Act:
The Competition Act is a federal law governing most business conduct in Canada. It contains both criminal and civil provisions aimed at preventing anti-competitive practices in the marketplace.
Compliance Assessment:
An examination of a program, activity or individual transaction to ensure that it conforms to legislation, regulations and administrative directives.
Corporate Compliance Program:
A corporate compliance program implemented within businesses, helps identify the boundaries of permissible conduct, as well as identify situations where it would be advisable to seek legal advice. Implementing a corporate compliance program can, in certain circumstances, be ordered by a court, agreed to in a consent agreement or be required as part of an alternative case resolution as a condition of the Competition Bureau not pursuing further enforcement action.
Competition Tribunal:
The Competition Tribunal is a specialized tribunal that combines expertise in economics and business with expertise in law. The Tribunal is a strictly adjudicative body that operates independently of any government department.
Complex Mergers:
Complex mergers involve proposed transactions between competitors, or between customers and suppliers, where there are indications that the transaction may, or is likely to, create, maintain or enhance market power. Proposed transactions, where the combined post-merger market share of the parties is potentially 35% or more, are generally classified as complex.
Consent Agreement:
A consent agreement is a negotiated settlement which is registered with the Competition Tribunal that, when registered, has the force of a court order; any violations of its terms may result in criminal penalties, including fines and imprisonment.
Consumer Packaging and Labelling Act:
The Consumer Packaging and Labelling Act is a statute relating to the packaging, labelling, sale, importation and advertising of prepackaged and certain other products.
Courts:
Under the criminal regime of the Competition Act, as well as under the Consumer Packaging and Labelling Act, the Precious Metals Marking Act and the Textile Labelling Act, certain practices may be brought before the Courts, which include the Federal Court or the Superior Court of a province. Under the civil regime of the Competition Act, certain practices may be brought for review before the Competition Tribunal, the Federal Court or the Superior Court of a province.
Immunity:
A party may receive immunity from prosecution from the Director of Public Prosecutions if the party discloses to the Competition Bureau an offence not yet detected or provides evidence that warrants a referral  to the Public Prosecution Service of Canada and also provided that the party cooperates with the Bureau and any subsequent prosecution.

Inquiry:
A formal process commenced when the Commissioner has reason to believe that an order has been contravened, grounds exist for the making of an order or an offence has been or is about to be committed, or on application under section 9 or when directed by the Minister and when he considers it necessary with a view to determining the facts. Initiating an inquiry allows the Commissioner to seek authorization from the Courts to use certain formal powers, for example, orders under section 11 of the Competition Act to compel persons to provide, under oath, testimony, records or written returns of information in furtherance of the inquiry.
Investigation:
A civil (non-merger) or criminal investigation under the Competition Act, the Consumer Packaging and Labelling Act, the Textile Labelling Act or the Precious Metals Marking Act (includes inquiries).
Leniency:
A party may receive lenient treatment in sentencing (upon recommendation by the Competition Bureau to the Public Prosecution Service of Canada) if the party pleads guilty to a cartel offence(s) and agrees to cooperate with the investigation and any prosecution.
Market Study:
A study on the influences of consumer behaviour and the analysis of market characteristics and trends. It is designed to improve the Bureau's understanding of the effects of competition on the economy.
Merger Review:
A review of a merger transaction under the Competition Act.
Non-Complex Mergers:
Non-complex mergers are readily identifiable by the clear absence of competition issues, and include transactions where there is no or minimal overlap between parties, assuming properly defined product and geographic markets. Minimal overlap includes a combined post-merger market share of less than 10% in any relevant market.
Precious Metals Marking Act:
The Precious Metals Marking Act is a statute relating to the marking of articles containing precious metals.
Section 11 Order:
A section 11 order allows the Commissioner to obtain information from persons who have or are likely to have information that is relevant to a matter under inquiry pursuant to section 10 of the Competition Act.
Textile Labelling Act:
The Textile Labelling Act is a statute relating to the labelling, sale, importation and advertising of consumer textile articles.
The Competition Advocate:
A short commentary, published periodically, that offers the Bureau's views on industries that may benefit from increased competition.
Written Opinions:
Written opinions are issued on the applicability of one or more provisions of the Competition Act or regulations to a proposed practice or conduct. They are binding on the Commissioner if all the material facts have been submitted, are accurate, and remain substantially unchanged. The Commissioner has the sole discretion to decline to issue a written opinion.