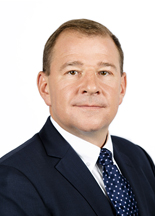 Matthew Boswell was appointed Commissioner of Competition on March 5, 2019, for a five-year term.

Before joining the Bureau, Mr. Boswell was Senior Litigation Counsel in the Enforcement Branch at the Ontario Securities Commission (OSC), where he primarily prosecuted securities fraud and related matters.

Prior to his work at the OSC, Mr. Boswell was an Assistant Crown Attorney in Toronto with the Ministry of the Attorney General of Ontario. As a Crown Attorney, he prosecuted all types of criminal offences.

Mr. Boswell has also worked in private practice and began his legal career at a Toronto law firm.