Appearance before the Standing Committee on Public Accounts (PACP) 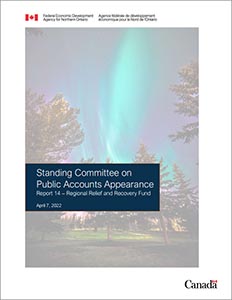 Audit of RRRF by the Office of the Auditor General

It is my privilege, to appear before this committee, today.

I would start by saying that I am joining you from Gatineau, which is located on the unceded territory of the Algonquin, an Anishinaabe people.

I am here in my capacity as FedNor’s Interim President.

As noted in the Auditor General’s report, FedNor was previously an Initiative under the Department of Innovation, Science and Economic Development.

FedNor was established, as a standalone regional development agency, on August 12, 2021.

I joined FedNor on that date.

I’m pleased to talk to you about FedNor’s experience, in delivering the Regional Relief and Recovery Fund – the RRRF in Northern Ontario, and the Agency’s response to the Auditor General’s audit of the program.

The audit has provided input that will help us better serve Canadians, when implementing national programming.

FedNor was able to deliver the RRRF quickly and effectively thanks to the proven and established processes and mechanisms built into its systems.

In Northern Ontario, the COVID-19 pandemic has had wide-ranging impacts on local economies, affecting businesses and communities that, in many cases, depend on single industries.

The RRRF has been vital for one of the hardest hit sectors in Northern Ontario, the tourism industry.

The region's tourism products are primarily geared towards the American market and tend to attract tourists who are seeking to experience the great outdoors.

With the extended closure of the United States border, the industry found itself in a precarious situation and its very survival was at stake.

But while the tourism industry was perhaps the most hard-hit sector in the region, it was not the only one.

As a result, there was significant demand for support through the RRRF from the manufacturing sector, and those businesses engaged in agriculture, forestry, hunting and fishing -- all which were significantly impacted.

FedNor took swift action, and with the 24 Community Futures organizations, delivered more than $100 million across the region, effectively providing support to key sectors, like tourism, agri-food and manufacturing and contributing to the economic stability and well-being of the region.

In total, more than 1,200 businesses and organizations benefited from RRRF support in the region.

More than 30% of our total funding went to support tourism.

The audit process, which took place as FedNor and its partner RDAs were still delivering the RRRF , enabled FedNor to work with other audited RDAs to quickly respond to concerns.

The Agency immediately sought to improve its practices and has already taken action to address the recommendations of the audit report.

In fact, lessons learned from the delivery of the program and the audit process have been applied to Budget 2021 programs.

As we work together to better serve Canadians, FedNor and the audited RDAs will continue to move forward on our action plan.

I would be pleased to answer any questions you may have. Thank you.

Issue - Results of RRRF Audit and FedNor next steps

FedNor support of underrepresented groups through other economic development programs:

Overview of the Committee