Factors to consider before borrowing

Important factors to consider before borrowing

Credit is a tool, just like a hammer is a tool. These tools are neither good nor bad. They can help you in achieving objectives if used properly. However, there may be negative consequences if credit is not used responsibly.

The two main components to consider when determining the cost of borrowing money are the principal amount and the interest.

Principal amount is the original amount borrowed or the amount that remains unpaid.

Interest is the additional amount owed to the lender based on the outstanding balance.

Borrowing money allows you to get what you want today, but at an additional cost. When borrowing money, people are able to make a purchase today by “renting” someone else’s money. The expense of renting this borrowed money is called interest. An important question to ask is whether the cost (interest) of borrowing someone else’s money is worth the benefit of making the purchase today instead of at a later date.

Comparing the costs of borrowing of different types of credit products

Let’s assume that you have made the decision to purchase something now and pay the additional borrowing cost. Interest often makes up a large part of the total purchase cost.

The challenge is that there are various ways to calculate interest and the cost of borrowing can vary significantly depending on the method used. The annual percentage rate (APR) is designed to provide a common measure for comparing the interest rates of different loan products.

The APR is a standard way of expressing the interest. It can help you compare rates from one loan to another because it's calculated using standardized rules.

For example, suppose your oven breaks down and you need to buy a new one. The new oven costs $1,000 at your local department store. You are considering different options, including a credit card, a store credit card, a line of credit from your bank, a rent-to-own contract, or using your emergency fund. 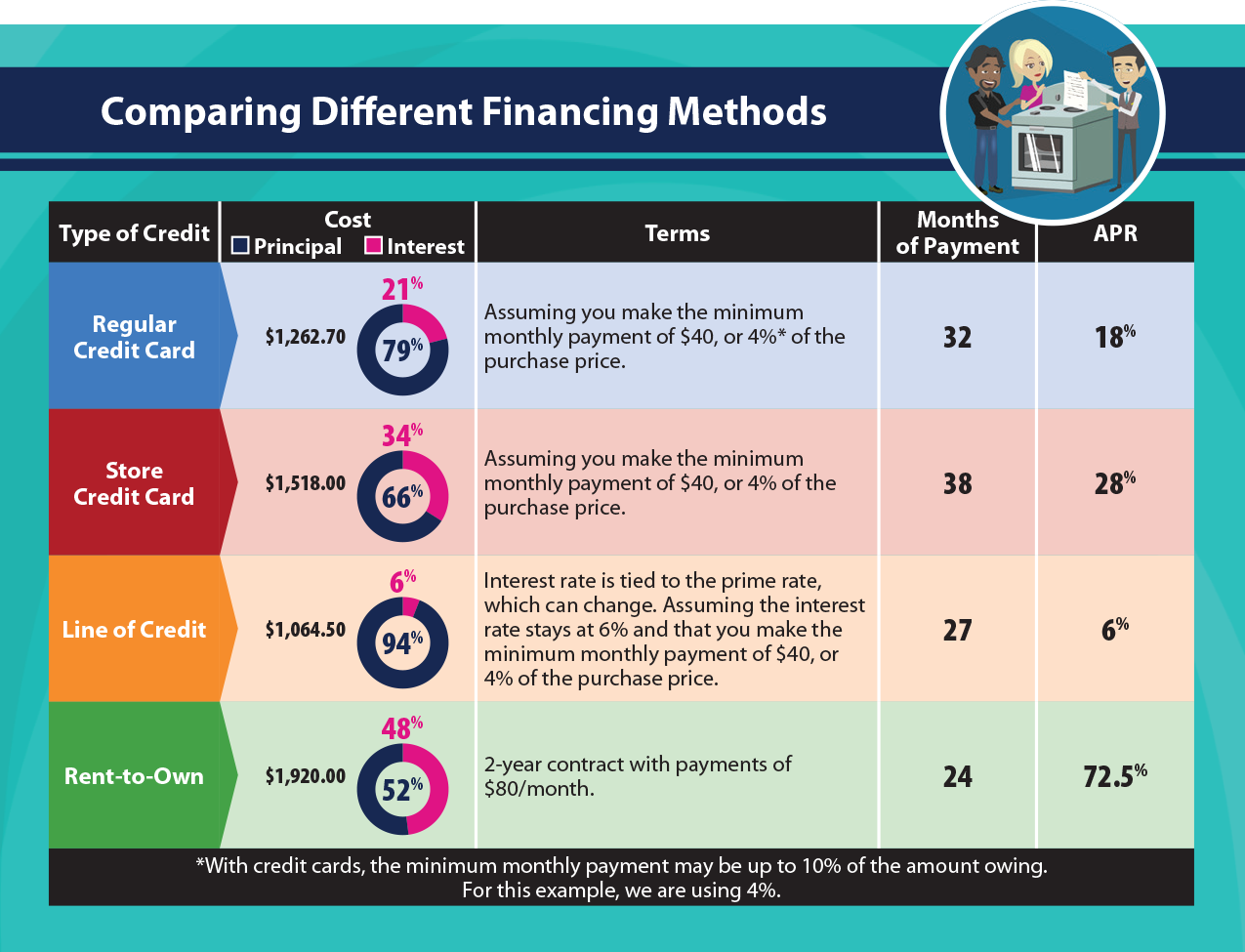 The best option is almost always to use your savings to pay for an unexpected expense such as this one. If you don’t have enough savings to cover the cost of the oven, then the next best option in this case is to pay for it using a line of credit. However, it's important to note that a line of credit is not always the least expensive loan option. There are many situations in which other types of credit might actually be less expensive and/or less risky than a line of credit. You should always explore options specific to your situation. Above all, consider all of the factors, such as what the total cost of the purchase will be.

Ask the lender about the fees and interest you will pay before you sign a loan agreement.

To understand the cost of a loan, make sure that you ask:

Remember that there may be other fees, charges and conditions associated with borrowing money, on top of the interest. Before deciding to borrow, make sure you understand all of the terms and conditions of the loan.

If you have questions, write them down and bring them to your in-person counselling session.

Payday loans are short-term loans, approximately 14 days in length. A payday loan is typically a small-dollar loan of up to $1,500. These loans are offered by a non-traditional financial service provider.

The cost of a payday loan is typically based on a set dollar amount per $100 borrowed. For instance, let’s assume that a $100 payday loans costs approximately $18. If someone borrows $100 from a payday loan and repays it in 2 weeks, this borrower will need to pay $18 on the $100. If the borrower continues to do this for an entire year, that is 26 payday loans. The original $100 loan will cost $468, and therefore the APR of this payday loan is 468%. Also, borrowers who are unable to repay their loans in full and on time may have to pay additional fees. When comparing the APR of payday loans to the APR of the financing products listed in the infographic above, payday loans are generally the most expensive financing option.

Consider your other options before resorting to payday loans:

Auto financing is another type of credit that many people need to consider. Buying a car is typically the second biggest purchase after a house and it often requires borrowing money.

The length of the loan and the amount of the payments are other important factors to consider when borrowing money to buy a car. These considerations are particularly important when buying something that will go down in value, such as an automobile.

If you have questions, write them down and bring them to your in-person counselling session.

↩ Previous
Next ↪
Report a problem