To obtain a paper copy of this publication or an alternate format (Braille, large print, etc.), please fill out the Publication Request form or contact:

© Her Majesty the Queen in Right of Canada as represented by the Minister of Industry, 2021 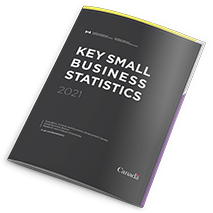 Key Small Business Statistics provides statistical data on the business sector in Canada, focusing on small and medium-sized enterprises (SMEs). The data are, at the time of publication, the most up-to-date statistics available to Innovation, Science and Economic Development Canada.

The current edition contains data on the following questions:

In this publication, the definition of a "business" or an "enterprise" may vary slightly according to the statistical sources used. Below is a list of those sources and links to the definitions used:

This publication defines a business based upon the number of paid employees.

Since self-employed and "indeterminate" businesses are not considered to have paid employeesFootnote 1, they are generally not included in this publication. This publication defines an SME as a business establishment with 1 to 499 paid employees. More specifically:

In March 2020, in response to the COVID-19 pandemic, restrictions aimed at slowing the spread of the virus were introduced. The resulting economic contraction significantly impacted all 2020 statistics presented in this publication. These impacts are reflected in all statistics presented in this report for the reference year 2020. However, for certain statistics the most recently available data are for the reference year 2018; the pandemic impacts are not reflected in these statistics.

As of December 2020, there were 1.22 million employer businesses in Canada.

High-growth firms (HGFs) are present in every economic sector. Based upon employment growth from 2015 to 2018, the highest concentration of HGFs in Canada is found in the following sectors: mining, quarrying, and oil and gas extraction (6.8 percent); information and cultural industries (6.7 percent); and professional, scientific and technical services (5.1 percent).

In 2020, SMEs contributed 43.0 percent of the total value of exported goods.

In 2020, Canada's main export destination was the United States, followed by China and the United Kingdom.

1.1 How many SMEs are there in Canada?

More than half of Canada's small employer businesses are concentrated in Ontario and Quebec (439,694 and 250,724, respectively). Western Canada has a large number of small businesses, led by British Columbia, which had 187,697 small businesses as of December 2020. In the Atlantic region, Nova Scotia has the most small businesses at 29,561.

1.2 How many businesses appear and disappear each year?

In 2020, the COVID-19 pandemic likely impacted business entries and exits. However, since the most recently available data on business creation and destruction are for the year 2018, these impacts are beyond the scope of this report. 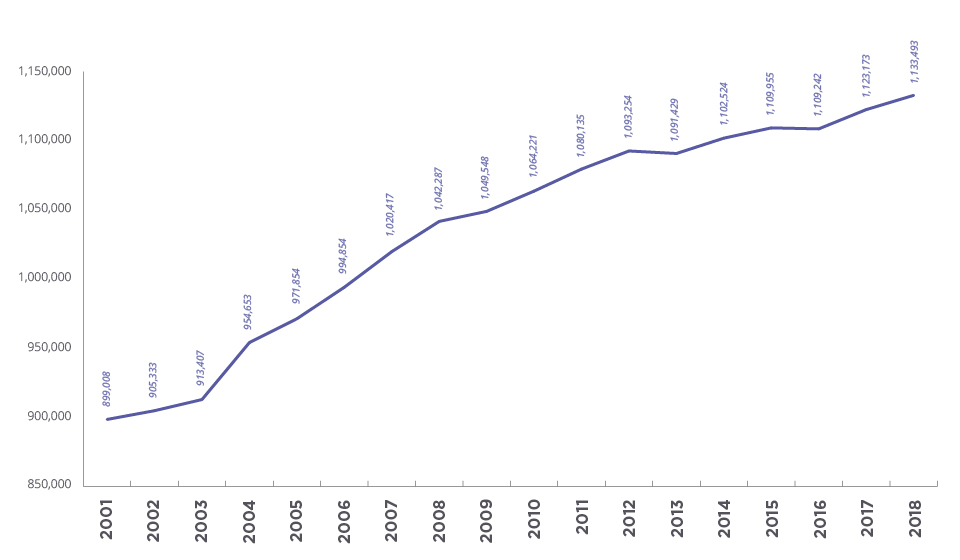 This variation between birth rates for these two sectors can be explained in part by the entry cost and different levels of competition. If this is, indeed, the case, higher birth rates would be observed in sectors with a lower entry cost or with a higher level of competition than other sectors.

Figure 2: Birth rate for enterprises with one or more employees, Canada and main sectors, 2001–2018 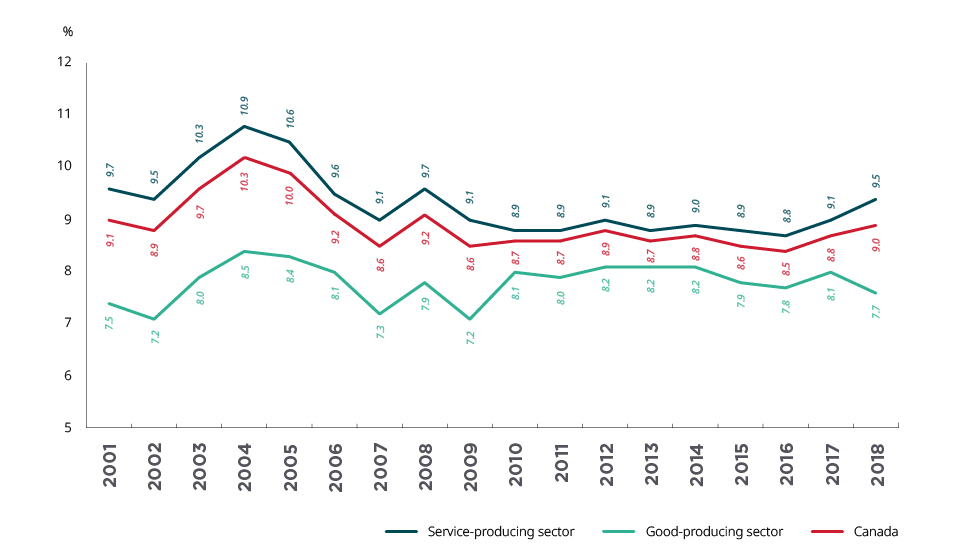 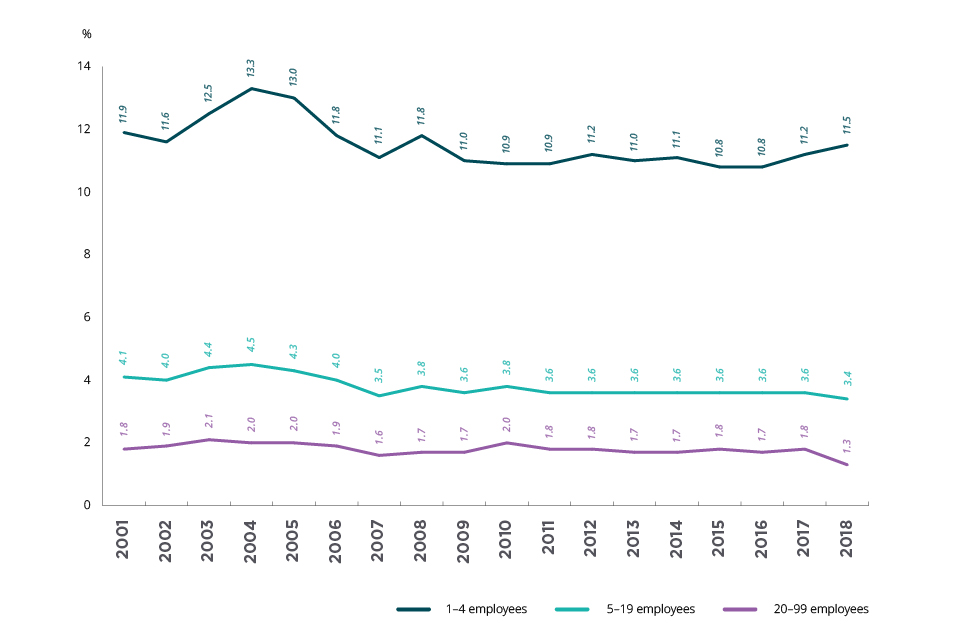 1.3 What proportion of new businesses survive the first seventeen years? 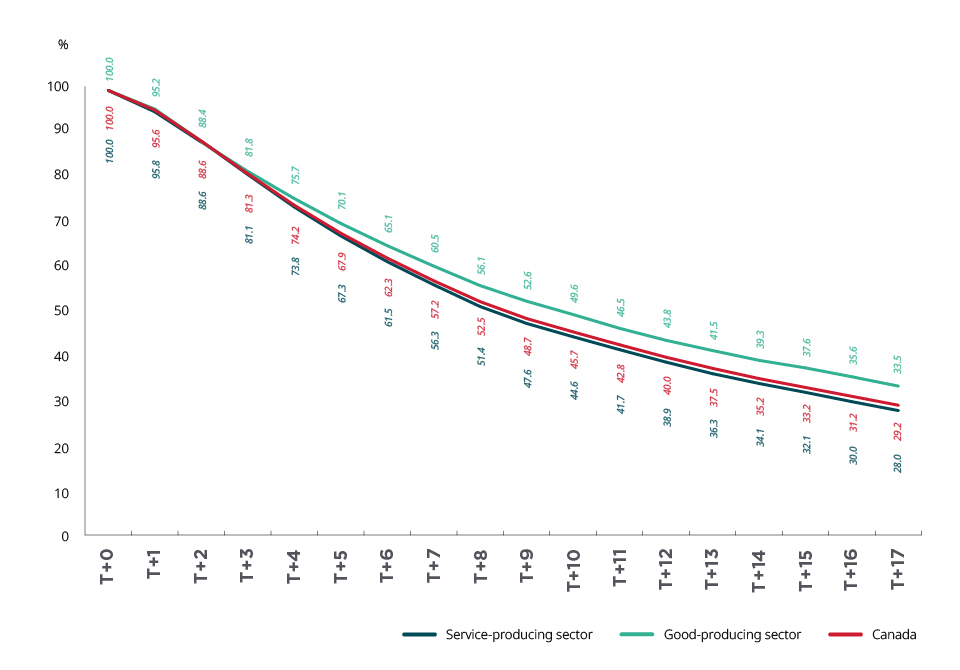 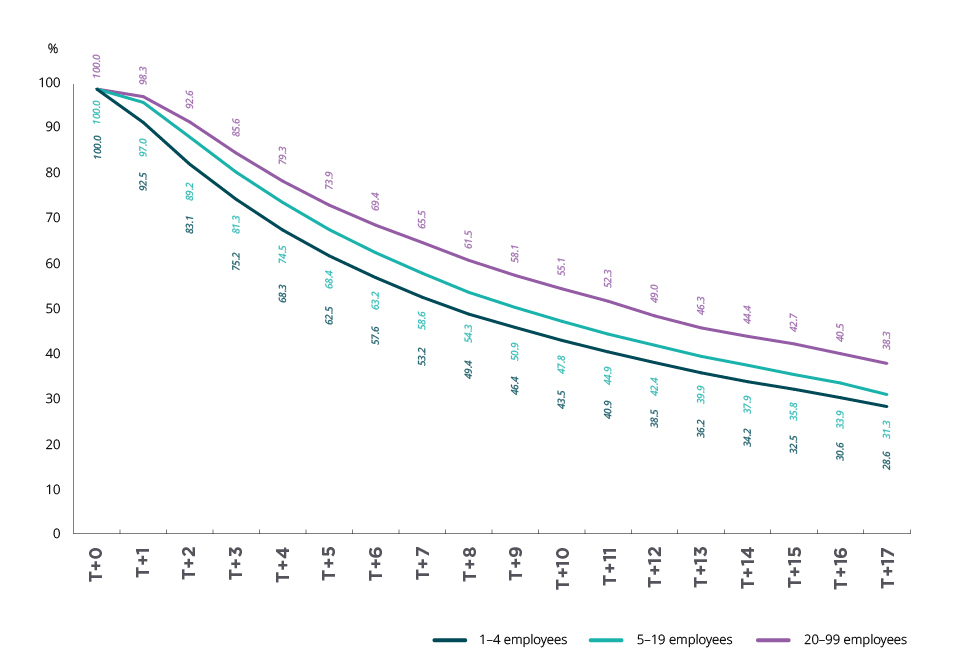 Figure 6: Survival rate by gender majority ownership of businesses with one or more employees, Canada 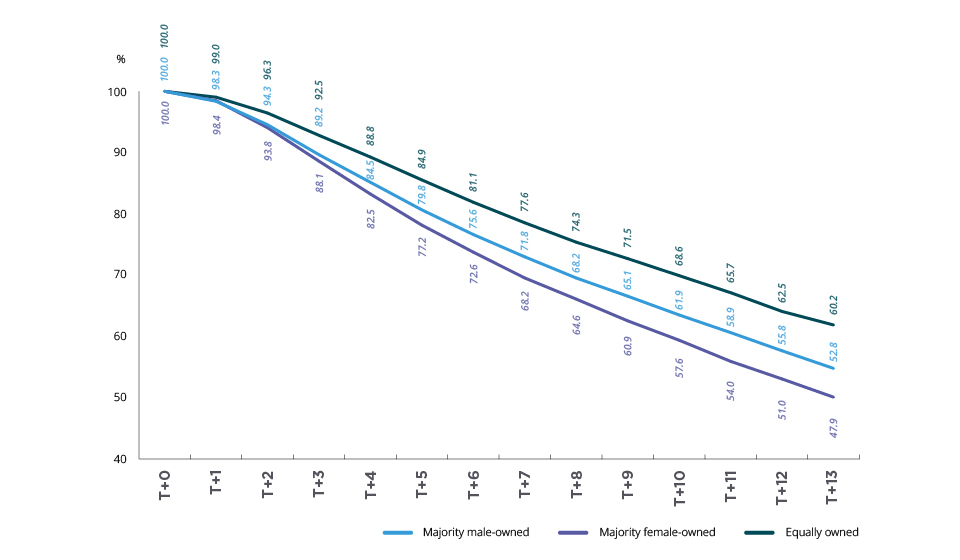 Figure 7: Birth rate by gender majority ownership of businesses with one or more employees, Canada 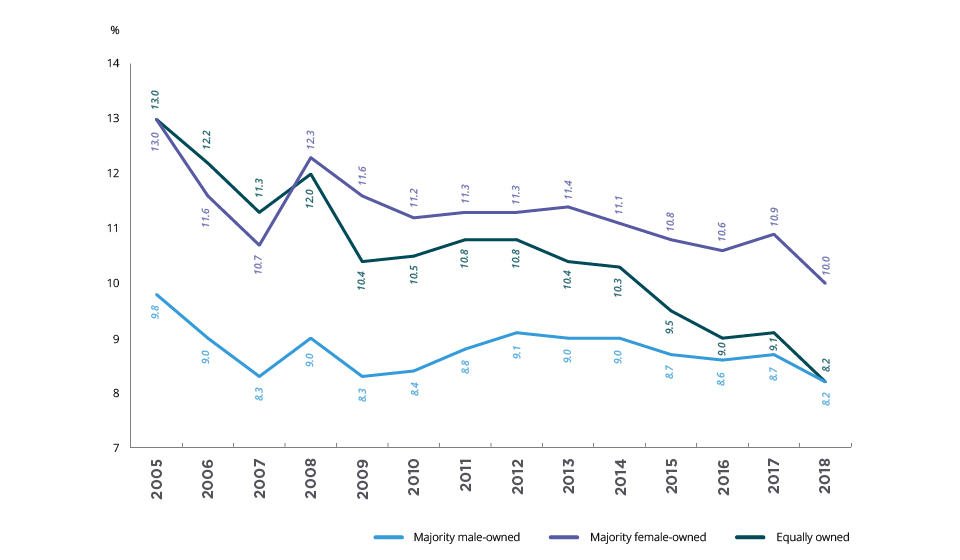 2.2 What is the distribution of employment across the private sector?

Accommodation and food services had the highest share of employees working in small businesses (1–99 employees), specifically 782,100 out of the total of 851,700 employees in the industry, or approximately 91.8 percent.

The most significant net employment changes observed in the services-producing sector were the decreases in accommodation and food services (−258,700) and in wholesale and retail trade (−141,600). These two industries alone accounted for 55.3 percent of the net change in the services-producing sector. The contribution to net employment change by SMEs in these two industries was 99.0 percent for the accommodation and food services sector and 98.2 percent for wholesale and retail trade.

The manufacturing, the construction and the mining, quarrying, and oil and gas extraction industries saw the most significant negative net employment changes in the goods-producing sector: −75,200, −46,800 and −22,200 jobs, respectively.

3.1 What is the proportion of high-growth firms?

Firms that achieve high growth in a short period of time tend to make a large contribution in terms of employment and wealth creation. Based upon a 2017 study,Footnote 14 high-growth firmsFootnote 15 contributed to 41 percent of the total net employment change between 2009 and 2012. Although policy-makers tend to associate high-growth firms with innovative high-tech firms, the reality, as discussed below, is that these firms are found across all industrial sectors.

Figure 10: Percentage of high-growth firms by industry, based upon revenue and employment growth, 20152018 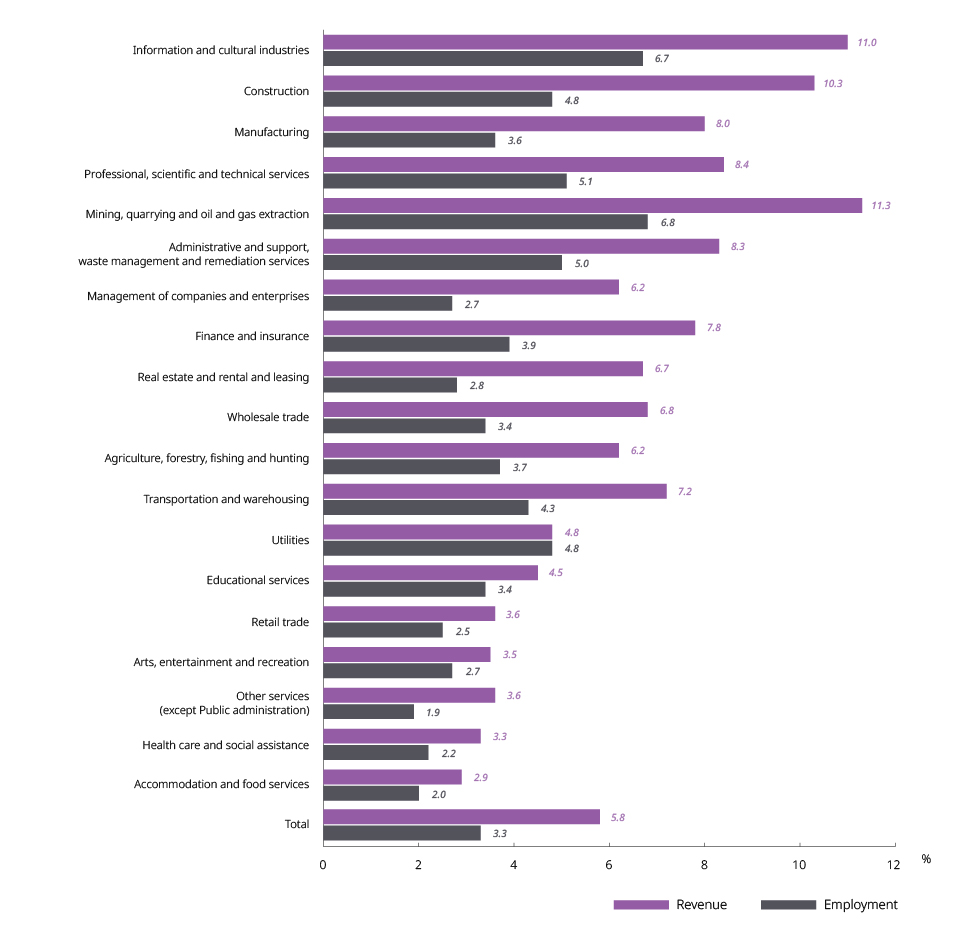 4.1 Which provinces have the highest concentrations of exporters?

Exporting is vital to Canada's economy. It is a driver of economic growth and is strongly correlated with real gross domestic product growth. Furthermore, exporting can provide a strategically important means of growing a firm by expanding its market beyond the confines of Canada's relatively small domestic market.

4.2 How do SMEs contribute to Canada's exports?

Figure 11: Contribution of SMEs to the export of goods by number of exporters and value of exports, Canada, 2020 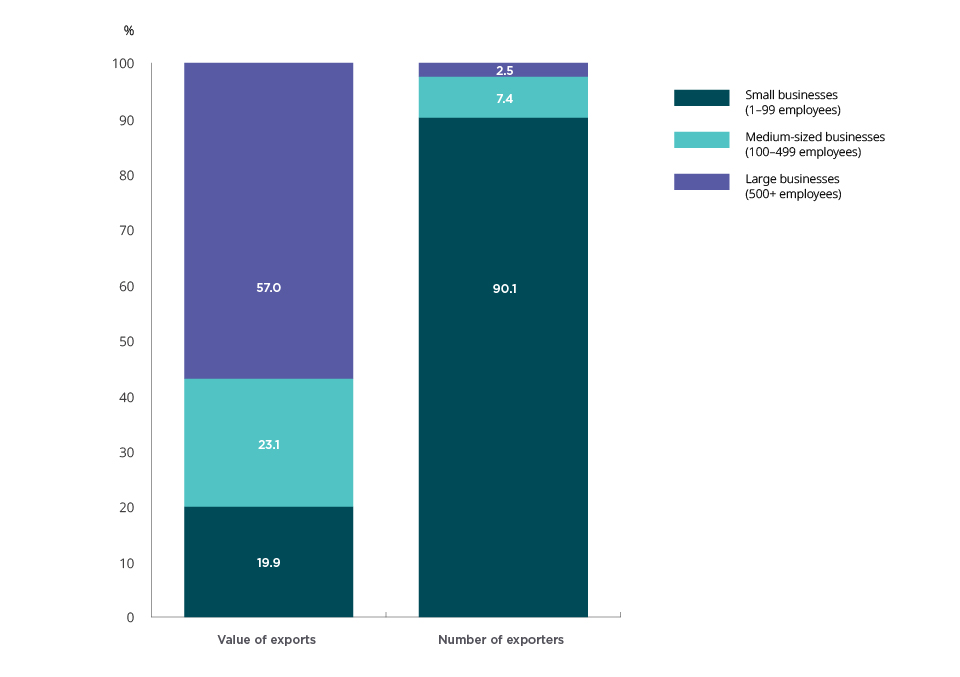 Note: Figures may not add up to totals because of rounding.
Source: Statistics Canada, Table 12-10-0098-01 — Trade in goods by exporter characteristics, by industry of establishment (x 1,000).

Figure 12: Main industries involved in the export of goods by value of exports, Canada, 2020 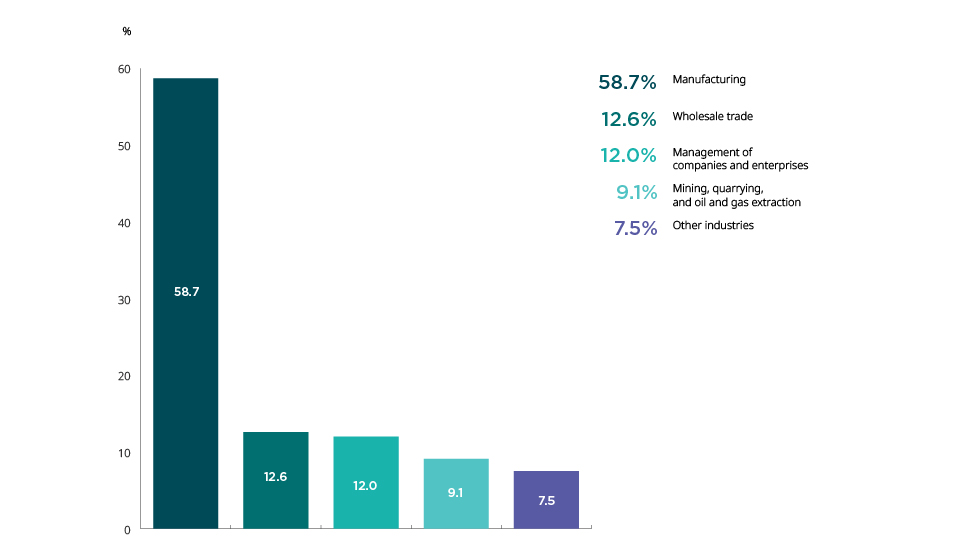 Note: Figures may not add up to 100 percent because of rounding.
Source: Statistics Canada, Table 12-10-0094-01 — Trade in goods by exporter characteristics, by enterprise employment size and industry.

Figure 13: Contribution of SMEs to the total value of exports by industry, Canada, 2020 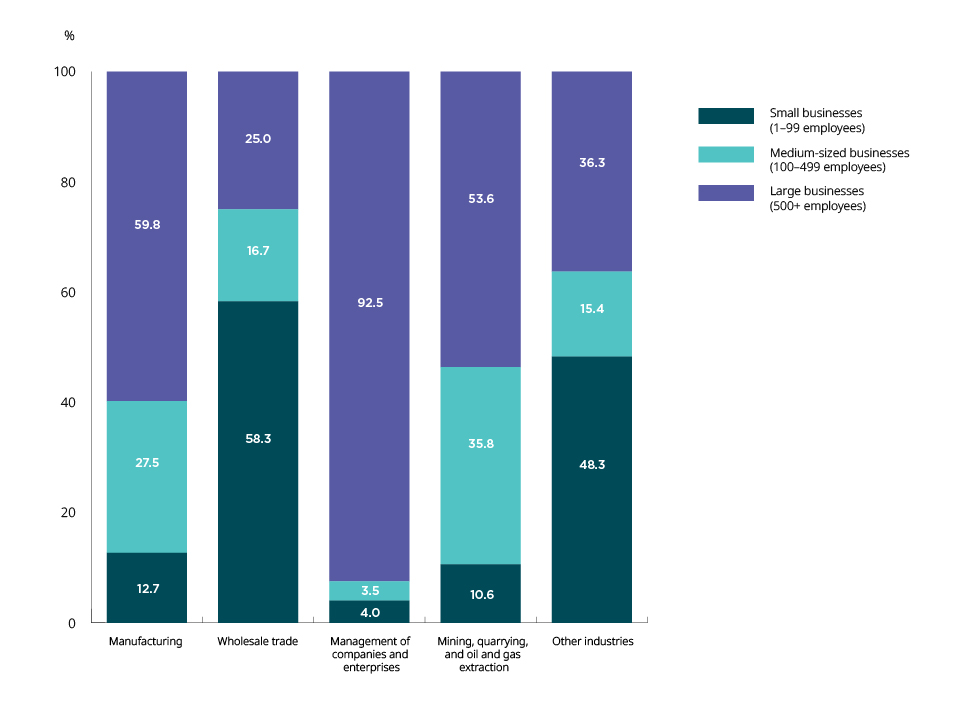 Note: Figures may not add up to 100 percent because of rounding.
Source: Statistics Canada, Table 12-10-0094-01 — Trade in goods by exporter characteristics, by enterprise employment size and industry.

4.3 What are Canada's main export destinations?

The COVID-19 pandemic has posed important challenges to exporting for Canadian businesses. In fact, between 2019 and 2020, the value of goods exported decreased by -11.5 percent, to almost $472 billion (Table 10). Exports to the United States, the main destination for Canadian goods exports, declined by -14.5 percent.

5.1 How do SMEs contribute to Canada's gross domestic product?

Gross domestic product (GDP) is a key measure of economic production that can be used to compare any two industries' value added, i.e., the value that an industry, through its activities, adds to its inputs. The main advantage of the GDP concept is that it avoids double counting; hence, it is considered superior in gauging economic performance compared to, for example, revenue, number of businesses or even employment. Statistics Canada recently produced estimates of GDP generated by the private sector, by business size for the 20082018 period.Footnote 16

In the services-producing sector, the greatest contributions of SMEs to GDP were observed in the educational services (89.6 percent), health care and social assistance (85.7 percent), and other services except public administration (85.0 percent) sectors. SMEs in the information, culture and recreation (24.3 percent), finance, insurance, real estate and leasing (32.0 percent), and transportation and warehousing (41.0 percent) industries had, on average, lower contributions to GDP.

Other groupings exist among this category of enterprises. For instance, enterprises with 1 to 4 employees are defined as micro-enterprises.

Net employment growth is the difference in total employment between two years.

Statistics Canada produces several sources of data (such as the Entrepreneurship Indicators Database and the Longitudinal Employment Analyses Program) that present similar data on business births and deaths. The differences in level between these sources and the data produced by the Economic Analysis Division (EAD) of Statistics Canada in the National Accounts Longitudinal Microdata File (NALMF) are a result of the different data sources and methodological concepts used. For instance, Statistics Canada also developed a newly experimental series on monthly business openings and closures based on the Longitudinal Employment Analysis Program. The data produced by the EAD through the NALMF were chosen because, in addition to providing the number of business births and deaths, the survival rate of start-up businesses is also available.

When updating the annual data on business births and deaths, the most recent year available is added and the previous statistics are revised accordingly. For this reason, the statistics in Key Small Business Statistics differ slightly from one issue to the next.

Only businesses with at least one employee are considered in the analysis of section 1.4.

The analysis has been repeated by firm sizes and the results follow similar trends to the aggregated results.

We observe that the survival rate by gender are higher than the survival curves shown in section 1.3. This is in part caused by the omission of the group of businesses for which we do not have information on gender ownership.

The analysis has also been repeated by firm sizes and the results follow similar trends to the aggregated results.

We also observe that the birth rates by gender ownership are trending down over time but in Figure 2 the trend is generally more flat. This difference is again mainly caused by the omission of the group of businesses for which we do not have information on gender ownership.

Private sector employees are found in every Canadian economic sector, except public administration.

Individuals who work for a local, provincial or federal government, a government service or agency, a Crown corporation, or a government-funded establishment, such as a school (including universities) or a hospital.

According to the Organisation for Economic Co-operation and Development, high-growth firms are firms with 10 or more employees that have experienced average annual growth greater than 20 percent, in terms of employment or revenue, over three consecutive years.

Statistics Canada made significant changes to the methodology used to generate the estimates of GDP by firm size. For this reason, caution should be applied in comparing the GDP statistics in this issue of the Key Small Business Statistics with those in previous issues.