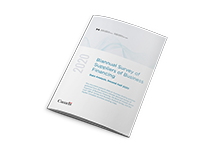 Outstanding credit and new loans extended to Canadian businesses by private sector lenders totalled $1,007.0 billion and $134.5 billion, respectively, in the second half of 2020 (July to December). During that period, the Government of Canada and Bank of Canada continued to provide fiscal and monetary support to businesses in order to counter the economic effects of the COVID-19 pandemic. Business financing programs offered by the Government of Canada provided significant support to overall business lending in the context of decreased private sector lending to businesses. Both lenders and borrowers reported to the Bank of Canada an easing in overall business lending conditions towards the end of the second half of 2020.

The Biannual Survey of Suppliers of Business Financing covers the lending of banks, credit unions and other suppliers of financing in Canada and excludes government-funded lending such as the Canada Emergency Business Account (CEBA).

According to data from Biannual Survey of Suppliers of Business Financing, the value of disbursements decreased by 12.3 percent from the first half of 2020 (January to June) to $134.5 billion at the end of the second half of 2020. This was the first decrease in the value of new loans recorded since the survey was first conducted in 2011.

The policy response to the economic effects of the COVID-19 pandemic introduced in the first half of 2020 was maintained during the second half of 2020. The policy response included monetary and fiscal policies to support business lending. The Bank of Canada held the policy interest rate at 0.25 percent. The Government of Canada continued to extend interest-free loans through the Canada Emergency Business Account (CEBA), as well as other business financing programs. The value of non-mortgage loans provided by the Government continued to increase, from $49 billion at the end of H1 2020 to $62 billion by the end of H2 2020.

Bank of Canada survey results indicate that lenders reported that overall business lending conditions eased towards the end of the second half of 2020. Borrowers also reported an easing of credit conditions during the same period.

Survey results from the Biannual Survey of Suppliers of Business Financing indicate that the value of credit disbursements and credit outstanding decreased between the first half and second half of 2020. The value of new loansFootnote 1 extended to businesses totalled $134.5 billion between July and December 2020 (H2 2020), compared to $153.3 billion in new loans disbursed between January and June 2020 (H1 2020), a decrease of 12.3 percent (Figure 1) and the first decrease in the value of new disbursements recorded since the survey was introduced in 2011. Total credit outstanding in H2 2020 decreased by 0.8 percent over H1 2020 levels to $1,007.0 billion; likewise, this was the first decrease in the value of credit outstanding since 2011, though the decrease was relatively small.

Note that these figures exclude Canada Emergency Business Account (CEBA) lending, valued at roughly $38.4 billion in December 2020, since those loans are considered by lenders to be off balance sheet items.Footnote 2

These decreases in new loans and credit outstanding occurred in the context of the continued policy response to the economic effects of the COVID-19 pandemic during the second half of 2020. Programs introduced by the Government of Canada during the initial months of the pandemic, such as interest free loans through CEBA, as well loan guarantee, co-lending and bridge financing programsFootnote 3 continued, while the Bank of Canada held the policy interest rate at 0.25 percent during the same period.

CEBA and other Government of Canada financing programs played a significant role in supporting business lending. Data from Statistics Canada's National Balance Sheet Accounts show that as private sector lending declined beginning in March 2020 with the onset of the COVID-19 pandemic,Footnote 4 the value of non-mortgage loans to private non-financial corporations by the Government nearly tripled between March 2020 and June 2020, from $18 billion to $49 billion. This figure continued to increase throughout H2 2020, and by December 2020 totalled $62 billion (Figure 2). CEBA lending was the primary driver of this $44 billion increase in non-mortgage loans. 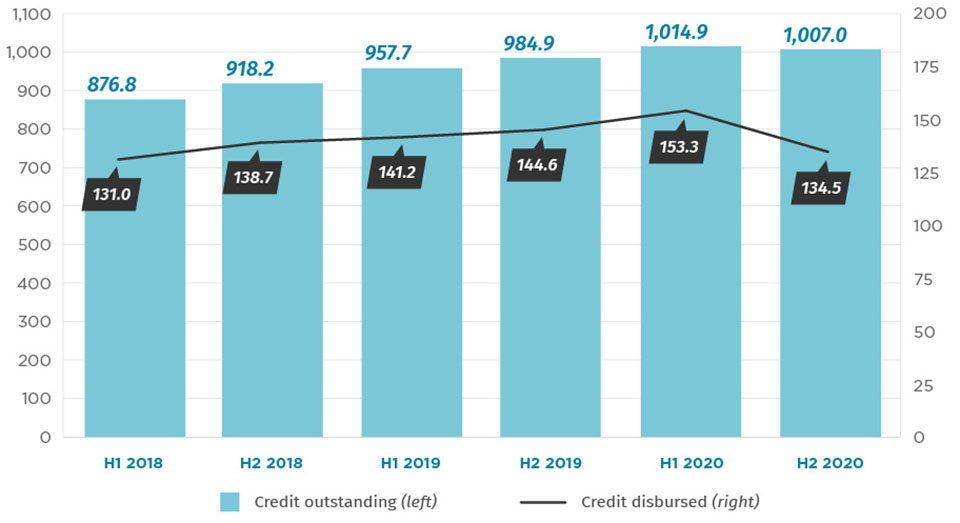 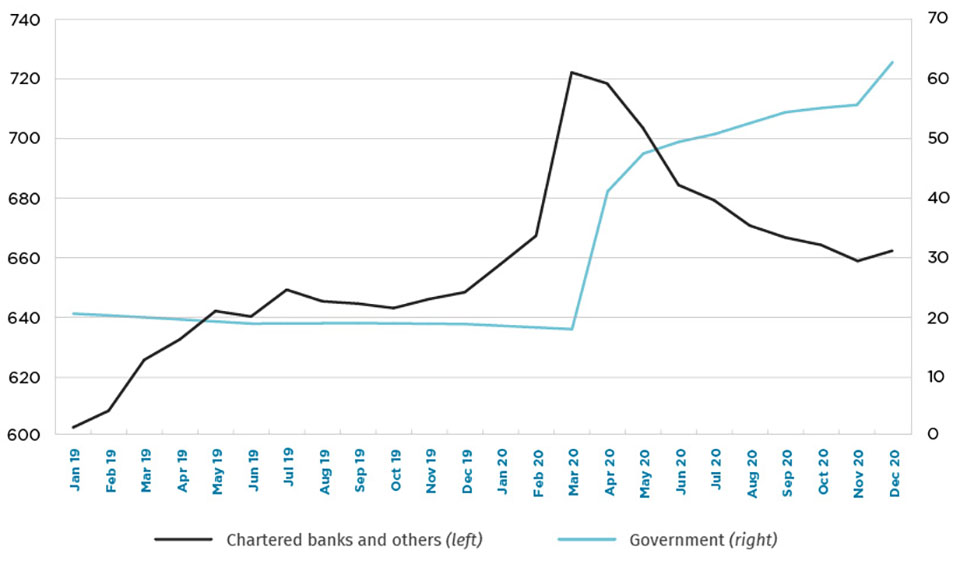 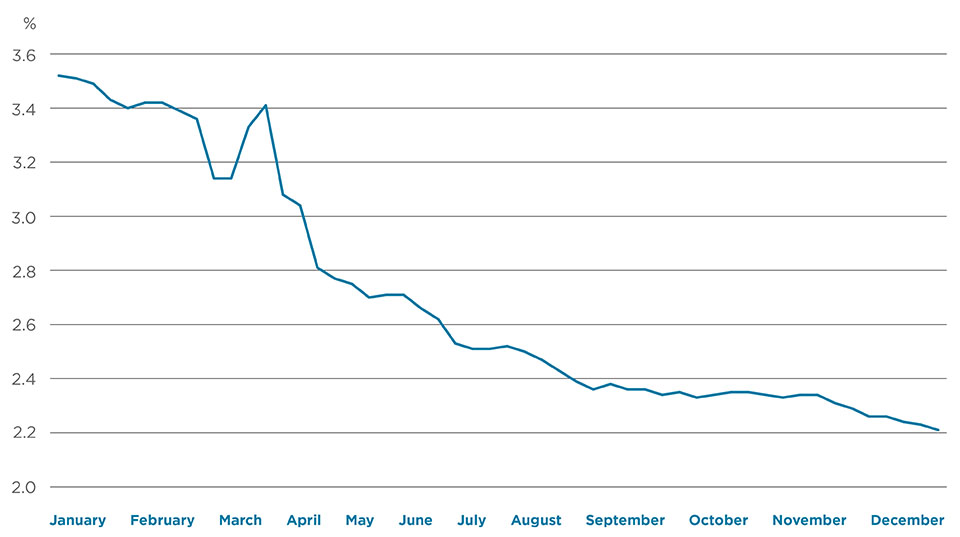 Results from the Bank of Canada's Senior Loan Officer Survey show that lenders reported that overall business lending conditions eased from the end of H1 2020 and towards the end of H2 2020 (Figure 4).

Similarly, results from the Bank of Canada's Business Outlook Survey indicate that, on balance, the business lending indicator from this survey points to an easing in credit conditions over the same period of time. Some businesses mentioned that the more favorable conditions were related to support from government programs that aimed on improving access to credit and business' cash flows. 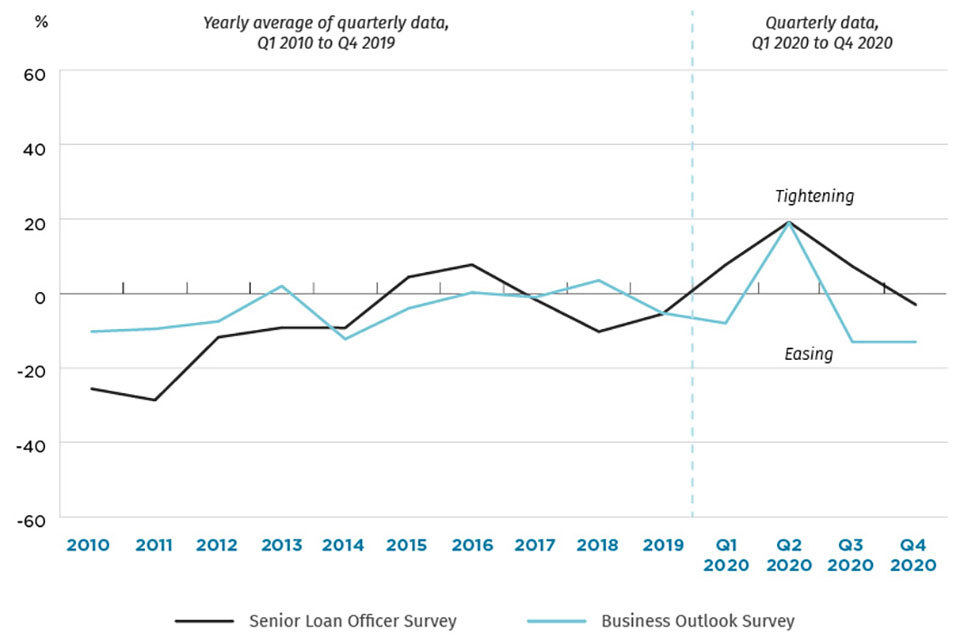 During H2 2020, monthly bankruptcies remained low relative to pre-pandemic levels, averaging 171 per month (Figure 5). This was a continuation of the trend that began with the onset of the pandemic, when bankruptcies decreased from 233 in February 2020 to 175 in March 2020, remaining low throughout the latter half of H1 2020. Bankruptcies in the years and months leading up to the pandemic were already relatively low, having declined steadily over the past decade.

The decline in bankruptcies should be interpreted with caution. In particular, the ongoing pandemic support programs such as CEBA, CEWS and CECRA introduced by the Government of Canada likely helped some businesses avoid or delay bankruptcy. Furthermore, bankruptcy figures do not comprise all closures, since they do not include businesses that terminated operations without filing for bankruptcy.

Figure 5: Number of bankruptcies for businesses 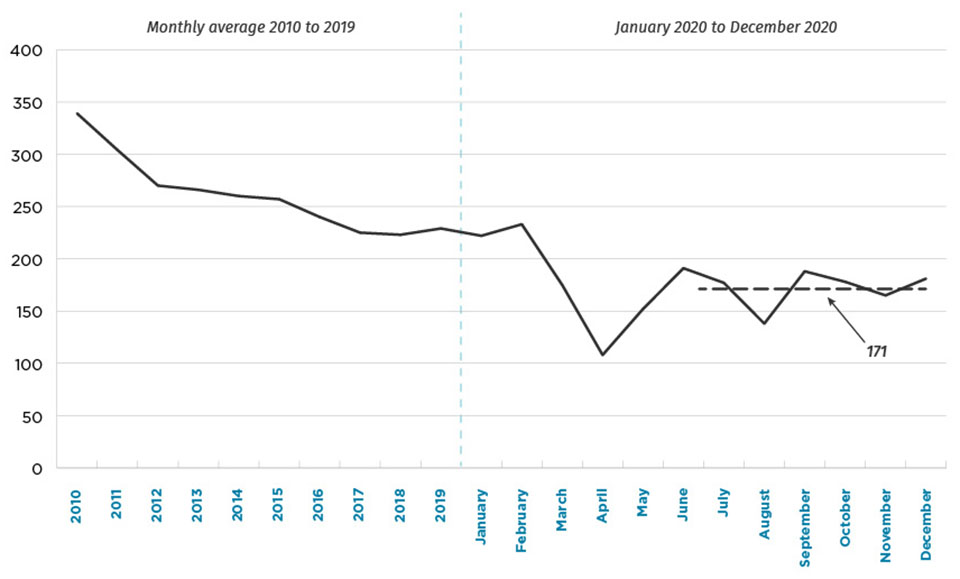 Source: Office of the Superintendent of Bankruptcy Canada, Insolvency Statistics in Canada.

Table 1 shows data on new lending from the Biannual Survey of Suppliers of Business Financing, with total loan disbursements distributed by supplier type. Domestic banks, which account for more than half of new lending in Canada, decreased their disbursement of credit by 15.4 percent between the first half of 2020 and the second half of 2020 to $74.0 billion. Likewise, new loans by other banks and finance companies decreased by 13.8 percent and 10.7 percent respectively. However, credit unions and caisses populaires and insurance companies and portfolio managers increased new lending by 3.4 percent and 10.7 percent respectively, over the same period.

Note: Figures may not add up to totals because of rounding.
Source: Statistics Canada, Biannual Survey of Suppliers of Business Financing, 2020.

Data from PayNet's Canadian Business Lending Index (CBLI) point to a slight increase in the value of new lending to small businesses between H1 2020 and H2 2020 (Figure 7). In contrast, the index values for medium-sized businesses trended downwards. Note that, in general, readers should be cautious in making direct comparisons between the two sources due to methodological differences. 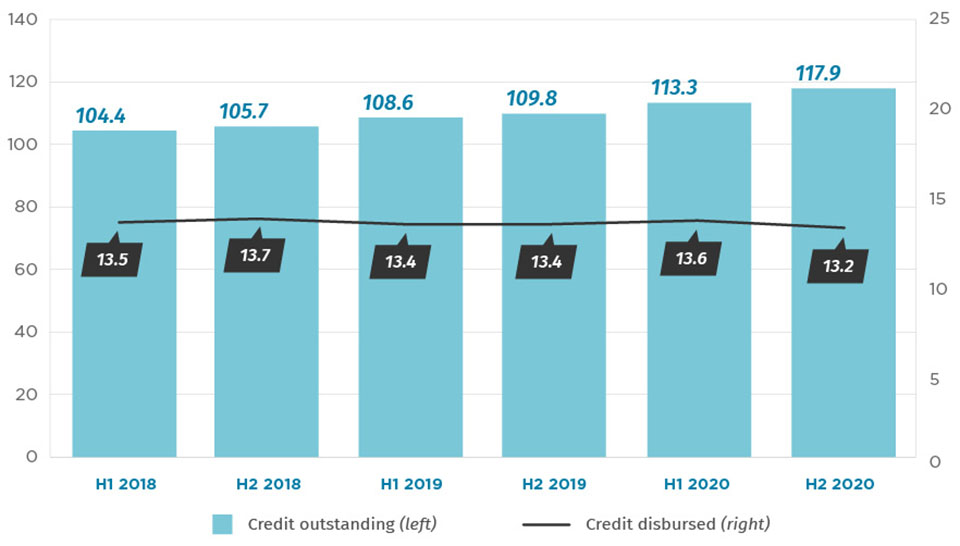 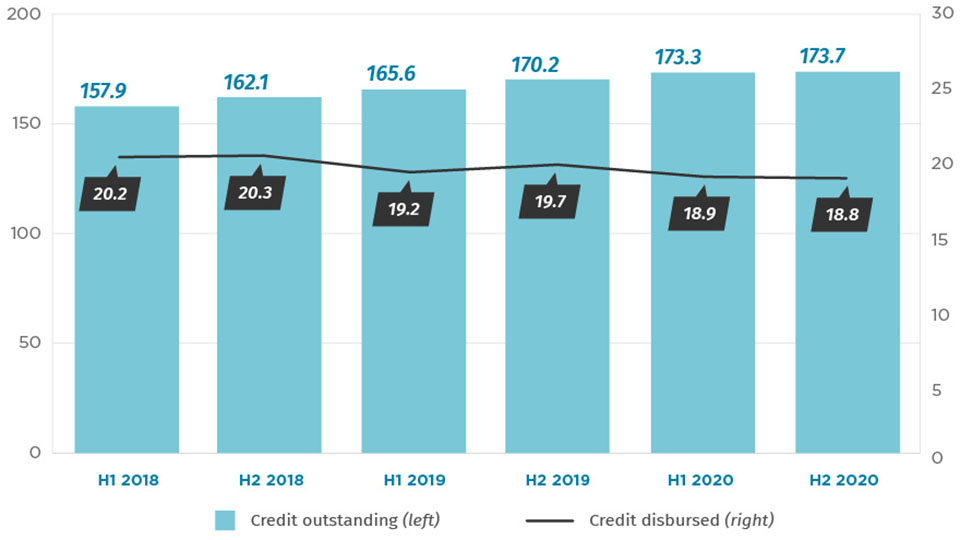 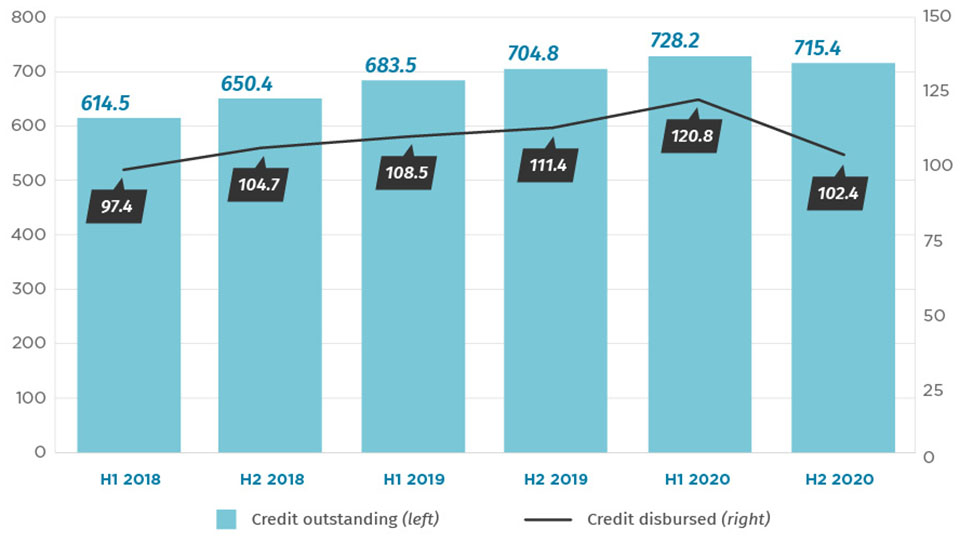 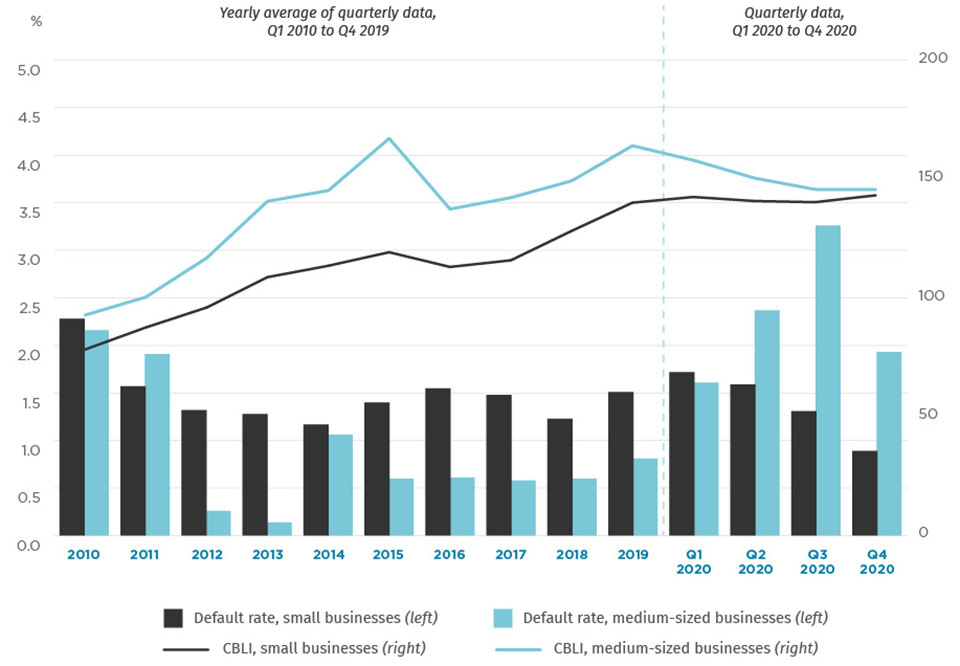 Note 1: The CBLI is a measure of the volume of new commercial loans and leases to small and medium-sized businesses. The CBLI uses a different definition of small and medium businesses than the one used in the Biannual Survey of Suppliers of Business Financing. Borrower size classification is based on the most current High Credit (H/C)—defined as the highest total balance outstanding in the PayNet Database for any given borrower. Small borrowers are those with a H/C of less than $3 million and medium borrowers are those with a H/C of more than $3 million but less than $14 million.

Note 2: Defaults are totaled for each quarter and are divided by the average current balance outstanding for the quarter. The result is then annualized. The CBLI is calculated based on the dollar weighted percentage change in qualifying new originations from the prior quarter to the current quarter, for qualifying lenders with data in both quarters. It is then presented on an absolute index basis indexed so that Q4 2007 equals 100.

PayNet's CBLI shows increases in new lending activity for the primary (7.7 percent), manufacturing (1.2 percent), wholesale and retail trade (4.0 percent) and the other industries (15.6 percent) sectors from H1 2020 to H2 2020. The CBLI pointed to significant decreases of 9.8 percent, 9.0 percent and 4.9 percent in new loans, respectively to the accommodation and food services sector, the professional, scientific and technical services sector and the transportation and warehousing sector. Over the same period, the construction sector experienced a slight drop in lending by 0.4 percent. 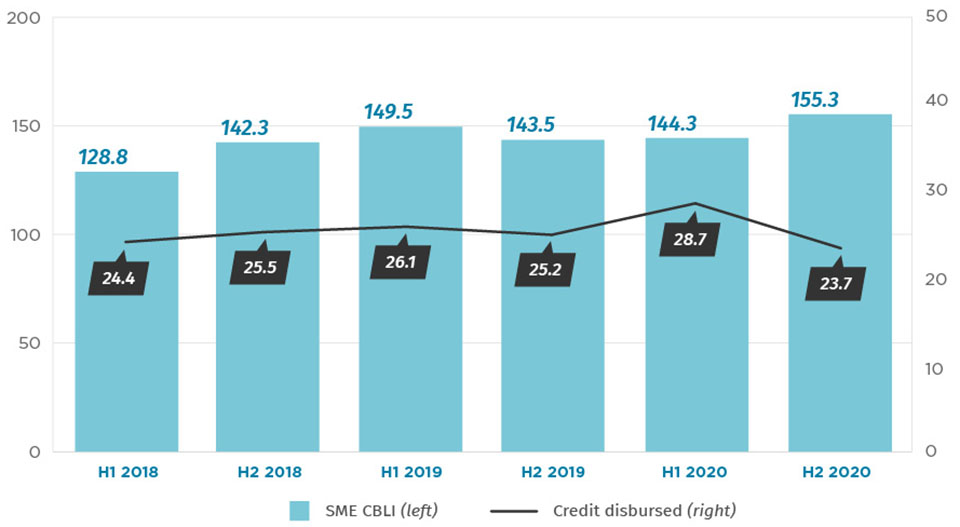 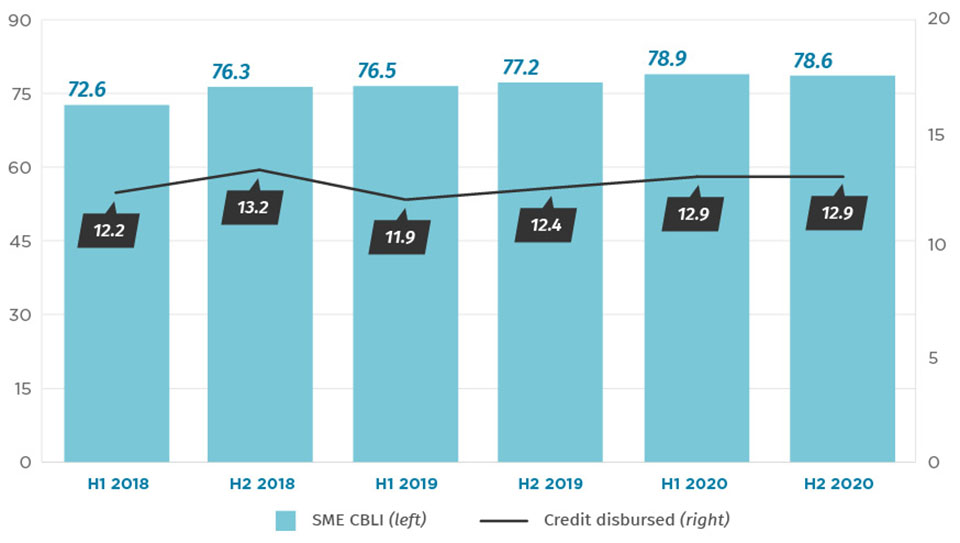 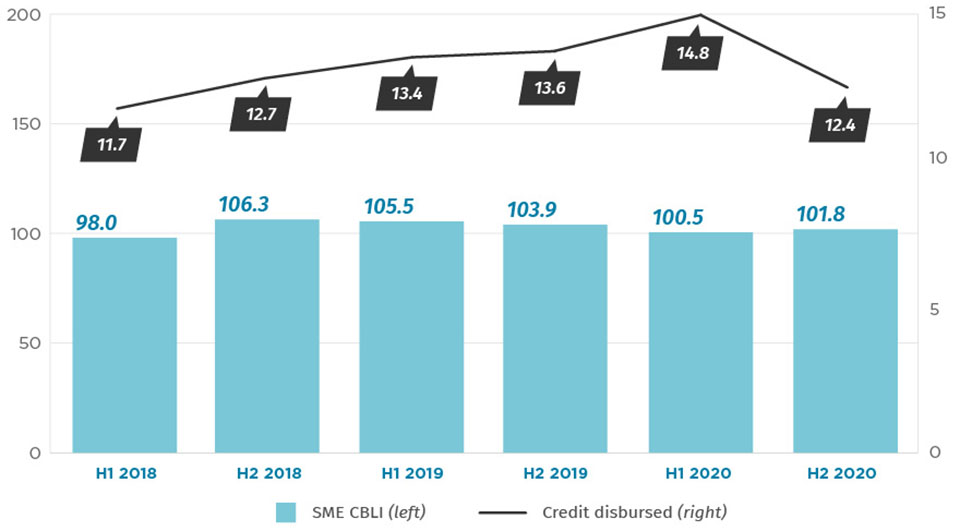 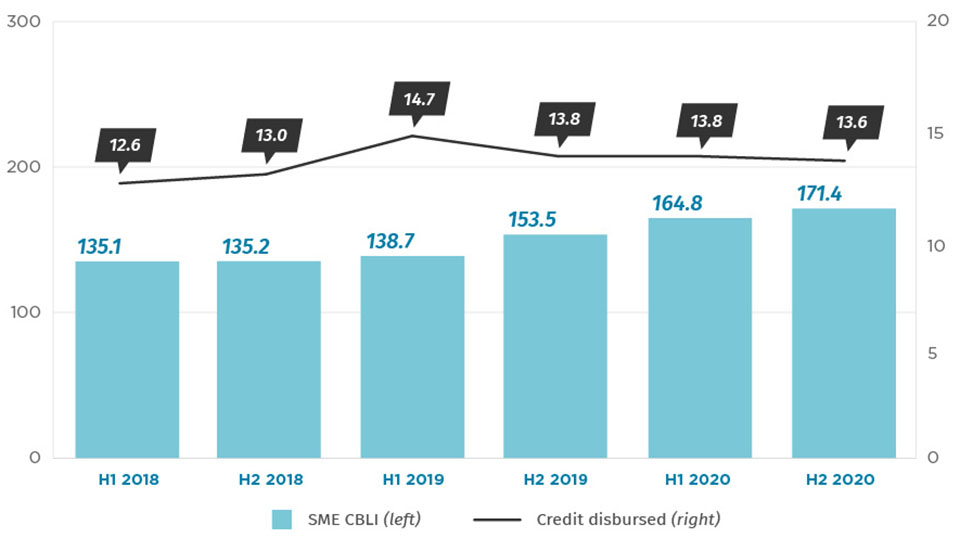 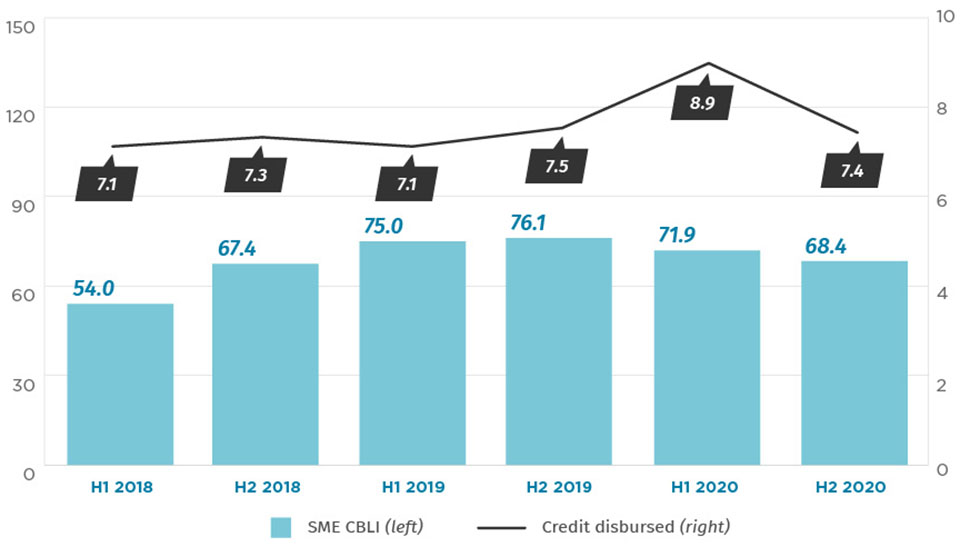 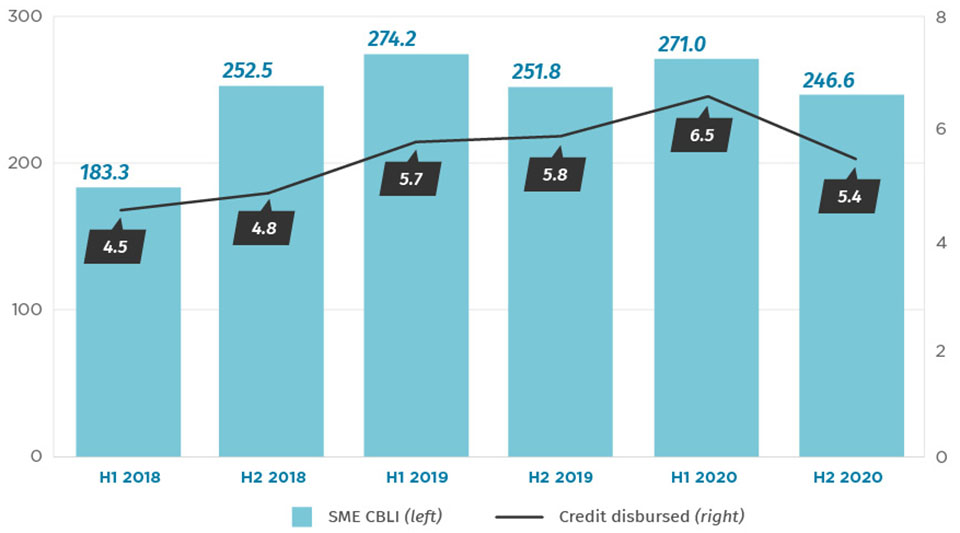 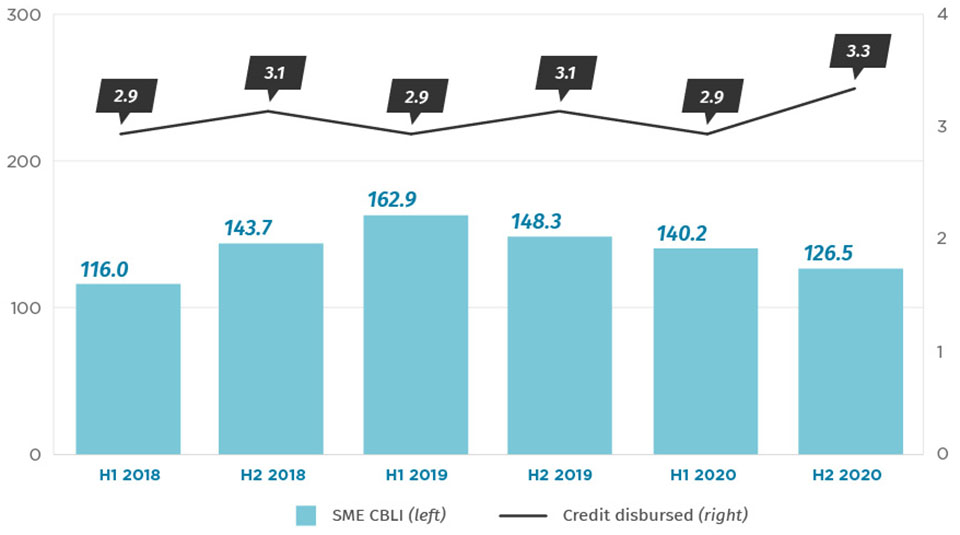 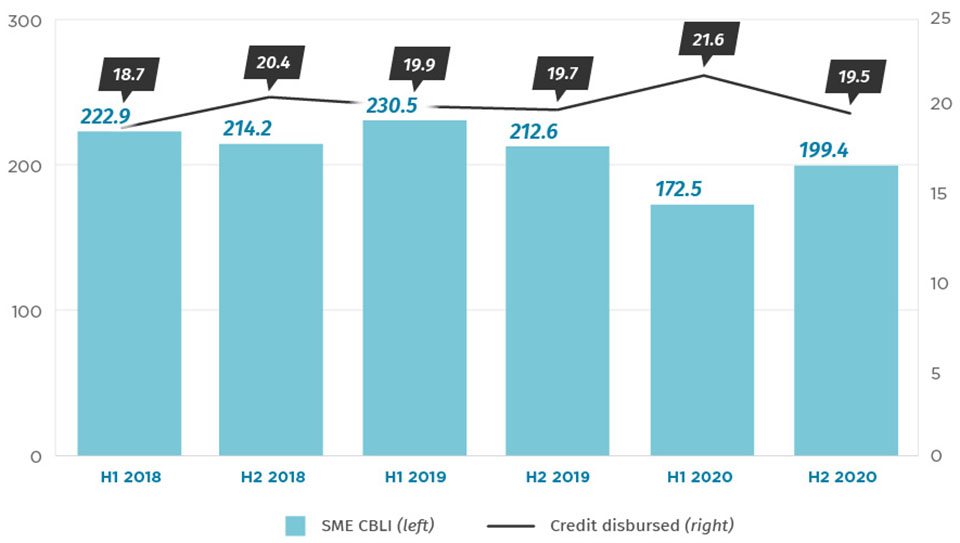 Note: Value of credit disbursed to firms in finance, insurance, real estate, and rental sector was excluded from "other industries".

About the main sources

The Statistics Canada Biannual Survey of Suppliers of Business Financing, the result of a commitment by the Government of Canada to improve the availability of information about financing of businesses in Canada, collects data from 120 major suppliers of financing, including domestic banks and credit unions and caisses populaires, representing over 90 percent of all lending to businesses in Canada.

The Bank of Canada Senior Loan Officer Survey collects information on the business-lending practices of Canadian financial institutions. In particular, the survey gathers the perspectives of respondents on price and non-price terms of business lending and on topical issues of interest to the Bank of Canada. The survey is conducted quarterly, near the end of the quarter for which the results are reported.

The Bank of Canada Business Outlook Survey consists of interviews conducted by the bank's regional offices with the senior management of about 100 firms, selected in accordance with the composition of Canada's gross domestic product. The survey's purpose is to gather the perspectives of these businesses on topics of interest to the Bank of Canada (such as demand and capacity pressures) and their forward- looking views on economic activity.

The PayNet Canadian Business Lending Index is built using PayNet's proprietary database, which is updated weekly, and represents a growing collection of commercial loans and leases encompassing more than 1 million reported contracts worth over $92 billion.

New loans include term loans, non-residential mortgages and credit provided under government guarantees that have a fixed repayment schedule of greater than one year.

CEBA provided, as of December 2020, interest-free and partially forgivable loans of $40,000 or $60,000 to roughly 806,500 businesses. Statistics on CEBA lending are available here and here. CEBA lending is excluded because it originates from the Government of Canada (rather than bank or other business lender).

The Business Credit Availability Program (BCAP) is a co-lending and loan guarantee program offering financing to small and medium-sized enterprises of up to $6.25 million. The Large Employer Emergency Financing Facility (LEEFF) provides bridge financing to large employer firms. The statistics presented in this report include BCAP lending but not LEEFF lending.

Not shown in Figures 8a to 8h are disbursements for the finance and insurance and the real estate and rental and leasing sectors, which are major borrowing sectors and wherein disbursements decreased by 29.9 percent and by 1.5 percent respectively, between H1 2020 and H2 2020.