The Canada Small Business Financing Program (CSBFP) is a loan loss-sharing program that partners with private sector lenders to increase the availability of financing to small businesses. Under the program, small businesses can access loans up to $1 million to purchase or improve real property, leasehold improvements and equipment. To be eligible, borrowers must have annual revenues of $10 million or less. The CSBFP is a national program that operates through a network of financial institutions in all provinces and territories.

The role of federal government

Innovation, Science and Economic Development (ISED) Canada is responsible for the design and administration of the CSBFP. It reviews and evaluates the legislative and regulatory frameworks and recommends improvements on a periodic basis. It also administers the program by registering loans, collecting fees and paying lenders eligible portions of losses on defaulted loans. ISED, however, is not involved in the disbursement and administration of the loans.

The role of lenders

Private sector lenders are responsible for making all credit decisions, approving and disbursing the loans, registering the loans with the CSBFP and administering the loans. Each lender has its own lending criteria subject to the requirements of the CSBFP. Once the loan is approved, the borrower receives the funds from the lender, not the government. If a loan is in default, the lender must recover all assets taken as collateral, before submitting the claim for loss to the CSBFP. Once the lender's information is reviewed and the claim is approved, the lender is paid 85 percent of the net eligible loss.

Lending decreased significantly due to the COVID-19 pandemic

Claims increased significantly due to the COVID-19 pandemic

The CSBFP paid a total of 872 claims to lenders representing $85.6 million. These claims were associated to defaulted loans made during the previous 10 to 15 years;

Start-ups and new businesses received the largest share of financing

Leasehold improvements and real property were the most common assets financed

Lending was accessible in every province and territory

Figure 1 shows lending across all Canadian provinces and territories during 2020-21. The breakdown by regions from highest to lowest volumes is as follows: 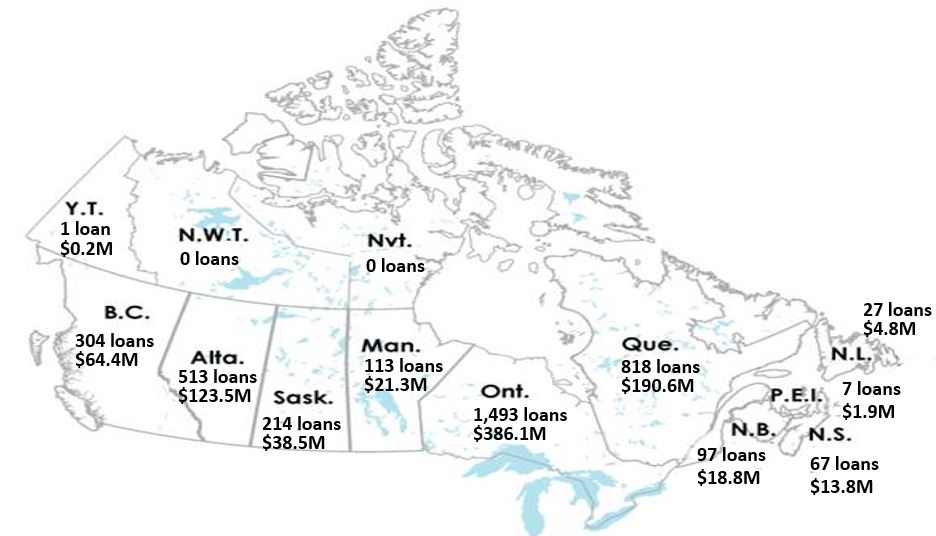 The CSBFP website continued to be one of ISED's most popular sites, with close to 454,000 visits, an 82% increase in visits relative to 2019-20. In addition, more than 1,253 telephone and 595 email inquiries were received from small businesses and lenders through the program's info line and website. Finally, the program's PDF pamphlet was accessed online 9,346 times.

For more information on the administration and financing activities of the CSBFP since 1999, visit the CSBFP website or the Government of Canada's Open data portal.